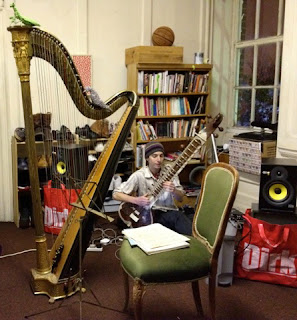 1.Where do you live and did you grow up there?
Walthamstow at the moment, I grew up in the suburbs of West London, in Hayes.

2.Do you like it there?
Yeah. I've found a good recycling centre/cafe down the road called The Hornbeam. Epping Forest isn't too far away. I've only been in Walthamstow for about a month so haven't had much of chance to explore more than that, what with Christmas and the New Year, but like most London towns it's definitely got lots of interesting food for sale thanks to all the different nationalities who live roundabout. I like living in this house as well, although I haven't really got to know all of my 18 housemates.


********
3.How long have you been making music?
Apart from practicing instruments, I guess my first real attempts at making music would have been at university when I was 18 and I've been churning out stuff at differing rates of quantity and of course quality ever since. So, that's 16 years. Blimey.

4.How long have you been making music as Same Actor?
I came up with that name in 2003

5.What are your other musical projects?
I call my self Same Actor for slightly mellow stuff and Hot Roddy for electronic music with beats. I've been playing regularly in a group of improvisors called Jerico Orchestra and I enjoy playing sitar in a live band incarnation of dubstep group Tru Tiger. I've been pushing my classical guitar playing a bit more in 2011, which is rewarding when I 'master' a piece but seems inferior to playing my own compositions. Also, I can only play the simplest of pieces at the moment. Finally, I could mention that my own sitar playing with my teacher Ramesh Chandra is still progressing and I'm slowly getting better at making the instrument 'sing' and familiarising myself with more and more ways of playing different ragas.

6.Do you currently play live?
When I get the time and energy, yes, but it reduces with each year. Having a musical day job (with elderly/learning difficulties/mental groups etc) uses up a lot of the time and energy I used to spend on solo music writing, practicing and playing live. I hope to turn that situation around one day but these dayjobs are rewarding in the meantime.


********
7.Any musical training as a child?
Not much, but I had some keyboard lessons, I played the recorder at school. That's about it. My Dad played me lots of beautiful records.

8.What music was around you in childhood?
It was just me, my Mum and my Dad at home in Hayes. My Dad played late 60s early 70s rock and folk, which was cool. He made compilation tapes which we played in the car. I heard 80s pop on the radio in the daytime and I would try and find more (slightly more) obscure stuff on the radio in the evenings. Sometimes my Mum would have on random classical stuff.

9.Any other musicians in your family?
My Mum can play a bit of piano and sings in choirs.

10.Name a favourite record from when you were 18/19.
I used to get in from my bar job at uni, put on Joni Mitchell and Neil Young records and smoke on my own. I was buying a lot of Miles Davis around that time too.

11.What record/mp3/album/tune/whatever have you listened to most in the last 12 months?
'Video Games' by Lana Del Ray. The new Plaid album sounded good too, come to think of it.


********
12.Is there anything else, apart from music, that you love to do or are especially good at?
I have a similar kind of love hate relationship with being a music 'facilitator' or 'teacher'. I've got into going for morning runs and cycling a lot more so I guess I love physical exercise. These are things I would miss if I couldn't do them, as well as cooking.
(Chris's answer to this hinted at a complex relationship. I asked him to clarify with the question "Do you feel fulfillment from teaching?", with the understanding that it is unanswerable, but the process of asking it is important)
What drives me in running sessions is trying to do a good job for the participants, and as it at least begins and ends with me as the leader of the proceedings, there are parallels to be drawn with playing gigs. I certainly get as emotionally attached to this kind of work as I do solo music. I've noticed that quite a lot of experimental performers also do some kind of teaching work. Given that I spend the same kind of energy on this community music as I used to on solo music, yes, it's inherently fulfilling, because one gets positive feedback most of the time. There aren't any rewards. The money's minimal, just like in music and after a bad session one feels terrible.
I agree that 'process' is important. Learning to be a good performer, striving to be a better teacher, looking for the perfect beat, answering open ended questions are all rewarding processes and if I become focused on the repeated all too similar 'products' then I lose interest. With sufficient kicks up the backside I can be made to try new things, musical or otherwise. Initially I don't enjoy it then I get somewhere and end up all the better for the new experience.

13.Do you experience synaesthesia? (Do you hear colours or taste sound?)
I guess I do to some extent because I felt to call one unreleased album of sitar based music 'Jaune' when I thought that that instrument sounded yellow.

14.Of the music you have made, do you have a favourite?
There's are certain songs that convey a lot of emotion for me so they stand out. These quite often don't translate to other people, but every now again favourites emerge. I have no favourite.

15.Who do you think you sound like?
Although I've been a student of Indian music for years, I know that my own compositions are not very much like North Indian Classical music. I like to dabble in all forms, styles, speeds and degrees of heaviness of electronic music because that's inherently what solo musicians do. I am quite introprospective. Instrumental, mainly, so people say that I lend myself to being a soundtrack for other mediums, and they may well be right. My Max MSP were inherently repetitive for better or for worse.


********
16.Why do you make music?
It used to be quite egotistic, now I've stopped caring so much about my own musical 'career'. In the meantime, sometimes it's like a present for a particular person, it's also usually some kind of an experiment. I like to only make music if there is at least one aspect that I regard as slightly original (even though probably everything's been done before, somewhere, now and I remain blissfully ignorant).

17.If money was no object, what would you be doing right now?
Living in a place where my family, girlfriend and friends want to live, so in the country I guess, and being guided to be doing things that improve the world. How's about that?