"Don't forget what happened to the man who suddenly got everything he ever wanted....he lived happily ever after" 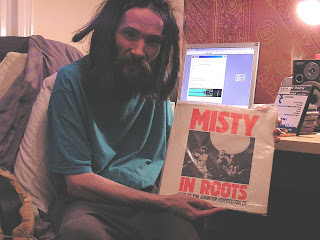 March on Eclectic Music For Mind And Bodhi:
Just one hour this month...but read on.
Here's links for the free stuff:
Sounds from the Finnish Hardcore Techno Underground: Kovaydin Vastarinta Records
Dvorjak Remastered: Local Records
Black Sea Hotel live at the Golden Festival
Lovely Little Girls: Massive Vulva Cantaloupe
Jared C. Balogh: Revitalized Eyes
Kappah: Tribal Dances: Bedroom Research Records
Blue Ducks: Six: Records On Ribs
Chuck Bettis & Friends:Playfull Moaner
Paneye: Lost In A Dark Aquarium: New Weird Australia
Also notable is a delicious collection of Balkan electronica from Green Queen Music, 'Balknaica v2'.
The big news this month is that I've started a new all Reggae Show on Dandelion Radio, provisionally called 'Dandelion Roots'.
I buy and listen to lot's reggae these days, and I've been playing it live for 4 years with my mate Gaz as 'Dub In The Pub' in Brighton UK. George warms up, I play to open the heart, and Gaz follows with the heavy bass. Resistance is futile. We are regularly joined by I Lodica on vocals and melodica. We are a dance outfit. Between us, we have decades of experience making people boogie.
I hear so much good new reggae music and re-issues of hard to find classics, that I want another outlet to share it. Hence 'Dandelion Roots'. I'll be focusing on solid dance tunes, but also the unusual, the sort of thing I might be reluctant to play on a night out, but would suit the DR ethos.

I have a lifelong relationship with reggae. I was 18 in 1981. Punk was over. Reggae was the rebel music of my generation, and it was also our dance music.
I lived for most of my youth in urban mixed communities, in the UK, where it was ubiquitous. It was later in my life that I came to realise the spirituality within the music. It often sings of suffering, but it feels life affirming. It sings of injustice, but affirms our self determination and the freedom of the spirit. It also sings of our friend and ally Mary. Hallelujahgobble. Despite the mask of christian imagery, it is at heart animistic, and indeed the rhythms are connected to ancient African rituals for invoking deities. The roots of reggae are the roots of us all, not just Africans. It sings of the Natural Man, the upright and humble man. No wonder that reggae has spread all over the world; it speaks to a need within us all, to remember how connected we really are...to each other, yes, but also to nature.

We are at home, and never left the garden. 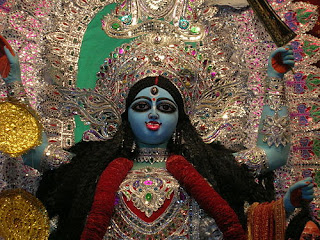 A statue of Kali in College Square, Arnab Dutta, Kolkata.
There are a few changes to the website.

The artist's bios are up. Thanks to everyone for answering my questions. I asked the kind of things I want to know. I hope it illuminates.

There are a few reviews for 23ID-Bird Flu.
Thanks to Maclej, Jason, Dellamorte and Louise.
I'm very happy that we reached 500 downloads in the first month.
I've admired Karol's music for many years and I'm gratified to play a part in getting it heard.
Next on wombnet:
Snail Bob: Unshellfish
.......coming soon....

Lastly, for my own purposes I wish to share this picture of my father, who died in 1976, but whose loving presence I have never felt so strongly as I do now. 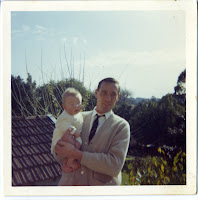 I and I is misty in I roots.