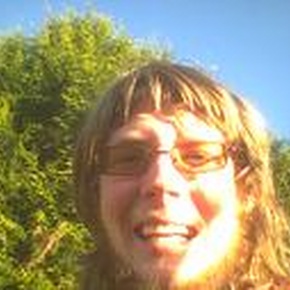 1.Where do you live and did you grow up there?
I have lived in Wellingborough in Northamptonshire all my life.

2.Do you like it there?
Yeah, its ok, a bit dull, but its home. The countryside is nice in Northamptonshire. No sea or mountains, though, but lots of disused ironstone quarries and old woods to walk the dog. I like walking.

3.How long have you been making music?
Since I was 15. I started making music on an old karaoke machine plugging guitar, keyboards and microphones into it

4.How long have you been making music as Ryan Hardy?
Well, always. I was just gonner call myself Ryan like Neil from the Young Ones sitcom who released a single (Nigel Planer in his Neil Character) a cover of Traffic's 'Hole in my shoe' just credited as Neil, but I just stuck with Ryan Hardy

5.What are your other musical projects?
I'm always working on songs... normal to strange to fucking weird!
Other places you could find my music...well
via Alex Gunningham management I have four of my songs from my first album Zombie Raising and a small bio on the website  http://www.awareness-music.com/

6.Do you currently play live?
I don't. I don't even see live acts. Maybe one day. I'm far too nervous just getting their...waiting to go on stage is bad enough...

7.Any musical training as a child?
Yes' At school I had fantastic music teachers and guitar lessons. They were very good with me and I am am very grateful.

8.What music was around you in childhood?
My dad listened to Mike Oldfield and Jean Michel Jarre and my mum listened to Cat Stevens and Moody Blues.

9.Any other musicians in your family?
My mum plays piano and my uncle Brian plays guitar piano. He does his own songs and recordings. Hes a big influence on me, his stuff is such fun and of the wall...just having a laugh at the end of the day.
Here's a couple of his songs:
You Stupid Bastard You Sat On My Cat
Noddy

10.Name a favourtie record from when you were 18/19?
I love this compilation I got from Uncut magazine of June 2003 Acid Daze 18 psychedelic classics from the uk underground which featured tracks by Tomorrow, Arthur Brown, Kevin Ayers, the Orginal Nirvana (of the 60s) and the Purple Gang

11.What record/mp3/album/tune/whatever have you listened to most in the last 12 months?
Some new albums I like are;
Ergo Phizmiz - Things To Do And Make,
Bearsuit - The Phantom Forest,
The Lovely Eggs - Cob Dominos
sooo many rude, mad, crazy, novelty songs I've enjoyed in the last 12 months that I've discovered in podcasts and other places. I love WFMU and Dandelion radio. I like to hear new stuff (at lest new to me) at lest every week. You don't know what ya gonner get...I only wish I could remember the acts/song titles names more.

12.Is there anything else, apart from music, that you love to do or are
especially good at?
I do some animation sometimes. Claymation or sometimes 3d 2d animation on my computer.
I'm not very good at it (thought i'm not very good at music making either i just do a HELL of a lot of music making/recording though and most is terrible). I've done animations to some of my songs.
Heres one of mine http://www.youtube.com/watch?v=fDoJ5LfWQN4
I kind of find animation with plasticine relaxing, though sometimes I just give up and squash the plasticine. I also like to make nettle beer but it only sometimes fizzes.

Editors note: Ryan is being modest. Here's his excellent claymation video for 'Birds Fly Around My Head'


13.Do you experience synaesthesia?
I don't think so. Sometimes when I hear songs from when I was young it gives me a taste in my mouth...jelly... old party music

14.Of the music you have made, do you have a favourite?
My favourite song I have made is, I think, Zombie Raising back in 2001. It was the first time I went to the studio. I can't belive it went so well. I don't think I even knew what multitrack recording was at the time. I thought it was going to be bounce recording (from tape to another tape, like i did at home at the time on my karaoke machine. There was something kinda magical about it.

15.Who do you think you sound like?
I'll just have a drink and think about it.
A trip, a fall, a laugh, a ball, but beware, may contain nuts.

16.Why do you make music?
I make music 'cos I look at the guitar neck or keyboard keys and think there must be a tune hidden in it that can get something going, that can put words together in my mind.......though I started making music just 'cos I found it such fun.

17.If money was no object what would you be doing right now?
Collecting guitars and other musical instruments.Flying