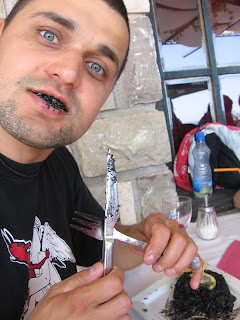 23ID is Karol Bujalski from Warsaw. He's been making experimental music for many years, and has been producing Intelligent Dance Music under this name since 2005. He's also known as part of the Polish exp/elec combo 'Wrenched Dandies'. You'll find him on LBA TRcords, Biv0uac, Simple Logic Records, Rebel Scream and wombnet.


I asked all the wombnet artists a few questions about themselves:


1.Where do you live and did you grow up there?
I live in Poland, I grew up there. Many people say I've got cosmopolitical mentality, I spent 1 year in the States and visited NYC four times afterwards. I like Berlin. I'd like to visit Argentina, Brasil, Nepal, Thailand, New Zealand and Gabon.

2.Do you like it there?
I don't understand the question ;)


********
3.How long have you been making music?
Since 1993. I started making sounds with my cousin generated from acoustic space and tapes. We were sound buffs. After our neodada duo had disbanded I invented Wrenched Dandies - they gave performance at Tecza movie theater and gigged at Proxima club in Warsaw. Throughout the time I came into do-it-yourself idea and started realising tapes, Harmider magazine and cd-rs.

6.Do you currently play live?
Very seldom. I was a Sunday dj a few years ago, but don't play in that way nowadays, I gig rarely with Olgierd and Thee L-ov-ee Komando.

8.What music was around you in childhood?
A lot. Difficult to say sth about influences...I've been listening to punk, jazz, reggae, industrial, rock, ambient, drum&bass, dubstep, trip hop, hip hop. I love Joy Division, Coil, Amon Tobin and many many more.

9.Any other musicians in your family?
No.

11.What record/mp3/album/tune/whatever have you listened to most in the last 12 months?
I'm enthusiastic about Thighpaulsandra music, I wish I would see this project live.


********
12.Is there anything else, apart from music, that you love to do or are
especially good at?
I'm proud father of sweet 15-month boy named Antek :) I'm a journalist, but it's more about constant clicking and providing news via internet. Books and vinyls are my fetish. I'm interested in psychology, occultism, sociology...

13.Do you experience synaesthesia? (Do you hear colours or taste sound?)
Only during psychedelic trips.

14.Of the music you have made, do you have a favourite?
Rodeo, The Golden Apple, Bird Flu.

15.Who do you think you sound like?
I don't know. A very difficult question indeed.

17.If you had all the money you need, what would you be doing right now?
I think I'd be doing the same except day-to-day job.


********
18.Anything else you want to say about yourself?
I'm introvert, less outspoken in groups. I have great respect for bon, visionary knowledge and ontological anarchy. Meditation prolongs life and is a great medicine for today's hard times. As for anarchism: there are no absolute truths and some of great anarchist knew it. I don't support terrorism and radical fighting against system but I'm against unjust enrichment and behaviour. We are all creative and everything is possible, but minority of people knows it. I don't believe in belief. Possibly world would be better without dogma and ortodoxy; The trio money, politics and religion seem to be the greatest sin of all times. Shadow has cast and planet earth is destroyed because of human greed - sad but maybe true. I love animals, especially cats and dogs.